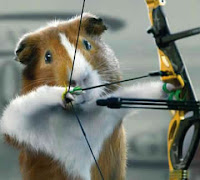 Hi Everyone.
Well as promised here is the next instalment of my blog. When I wrote to you all last it was my 40th birthday and since then I have to say I do feel completely different (in a good way). My life seems to have taken off in a totally new direction. I feel like my head is held a little higher and my confidence has gone through the roof, as well as the need to do lots of new and exciting things.
The list of things to do in my 40th year is rapidly decreasing and I am crossing things off each week. The latest thing to cross off was Archery. This all happened last week when the Husband and I plus 2 kids, a Grandma and 1 crazy dog headed off to Centre Parcs for 4 days. On arrival we were met by a very cheerful man who gave us the keys to our log cabin and went through a few rules about being in the middle of nature. Now even we were not paying attention or he just forget to tell us but it suddenly occurred on us as we were driving up and up and up and up a bit more that it was possible that we were going to get back to nature up in the clouds, our area was called Heavens Gate and let me tell you it was appropriately named. 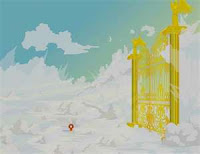 Once we had passed through the Pearly Gates and had a chat with God himself we found our Log Cabin nestled in amongst the beautiful woodland of Longleat (or Heaven, whichever). We got out of our car only to be met by 2 other residents of the woodlands.......a couple of ducks sitting on our front porch as if waiting for us to let them in. As if by magic my mother who as you all know has an obsession with food produced a loaf of brown bread from god knows where and proceeded to feed them, well that was it our resident ducks never left for the whole 4 days, the kids lovingly named them Dora and Diego and each morning and evening then returned for their breakfast and dinner.

As if having a couple of ducks wasn't enough we were then inundated with squirrels, birds a deer and a family of badgers all of whom had their own feeding schedule drawn up by my Mother and kids. My Mother even seemed to have all the necessary food for each species. The poor dog was so traumatised by the whole pantomime that I think he will need therapy for at least a year. 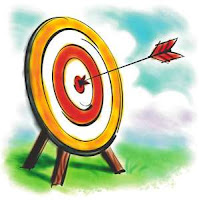 On the Sunday it was my chance to cross of the Archery part on my list. The Husband, myself and the kids headed off to the Archery course with great anticipation. Once we had been given all the ground rules about not shooting anyone blah blah blah, we were paired up. The only problem was that The Husband was paired up with some woman who claimed she had done Archery at a professional level and I was paired up with the most boring man on the planet called Keith who quite frankly I think had had a sense of humour bypass. He informed me that the targets were not far enough away in his first sentence to me and I knew I wanted to shoot him through the foot. The session went a bit like some bad Its A Knockout for me with "Keith" hitting the bloody target most times and my arrow missing the target and ending up miles away.
I thought that all was lost when suddenly as if sent from the Angels a young instructor who must of sensed my need to kill "Keith" came behind me and in a very gentle way helped me fire my arrow which subsequently hit the target. Now I realise that he was young enough to be my son but I have to say I enjoyed the fact that this young good looking cross bow welding man was helping me, I think I did go a bit girly and giggled a lot as shot after shot he helped me aim my arrow and hit the target time and time again. Even when "Keith" said it was cheating as he hadn't had any help did I care. It was at that point that I asked when we could put an apple on our partners head and aim at that. That shut "Keith" up I can tell you.
I was broken from my Maid Marion/Robin of Sherwood trance when I suddenly remembered that The Husband was actually in the next bay and was watching me with Robin of Sherwood with what I can only describe as the sort of look you get when one of your kids does something so naughty but you cant shout at them as everyone will see. I smiled one of my sweetest smiles and gave him a cheeky wink and wandered over to him pretending I had know idea why he looked cross. He whispered in my ear "does that twat realise I am your 6ft 5 husband and I am holding a crossbow which is primed and ready to fire". WHOOPS !!!
I reassured him that he was only helping me because I was so fed up with "Keith" and he felt sorry for me, which I think he bought.
I left the lesson thinking what a fab time we had all had and felt very happy with myself for beating "Keith" and for not killing him with a single arrow to the head. The Husband still looked a little jealous about the the Robin of Sherwood thing which was quite cute as he doesn't usually do the jealous Husband thing. This was short lived as about 3 hours later we saw Robin of Sherwood with his partner...........another bloody man. Just my luck, although I haven't been able to wipe the smirk off of The Husbands face as he tries hard not to tell too many jokes.

We left our woodland retreat with many happy memories in tow. My Mothers personnel favourite being The Husband coming down the water flume like the penguin from Happy Feet. The Teenagers favourite thing was realising that you could still get Face Book on her Blackberry in the middle of the wilderness, the Whirlwinds most awesome memory (apart from sleeping in the woods and not getting scared after watching Dr Who) was
managing to get to the top of the climbing wall and then abseiling down whilst watching me gasp in horror at his bravery.
And my favourite memory, well that's an easy one................................ being with my gorgeous family feeling loved and cherished by each and everyone of them and realising that you make your own laughter in this life and lets face it folks we could all do with a little bit of laughter in this life.

Lots of Love
ME
xxxxx