Myself , The Northern Mother and the Spaniel decided to venture out for a walk in the woods today. The weather has been so grotty lately that it was nice to be outside with the sun on our faces.

The Spaniel, being a slightly pampered pooch was demoted to the back seat so that mum could sit in the front. He is so pampered that she even offered to swap places with him as he wined and winged in the back.

On our arrival we were greeted by a whole flock of sheep who took it upon themselves to mock the dogs noisy protests by bleating at him very loudly. He in turn squealed even louder and before we knew it the peace and quiet of the beautiful church grounds had vanished into a scene fresh from animals gone wild.

I really have no idea why he makes these noises other than he is just so excited and cannot contain himself (that and the fact he is slightly insane). It feels like I have a really naughty 2 year old having the most spectacular tantrum. People will stop and stare and shake their heads in disbelief at the raucous sounds he makes. I have even had someone ask me if he is in pain to which I replied "he might be in a minute if he doesn't shut up". The thing that makes me smile is the looks on the other dogs faces, what are they thinking I wonder to myself? Thank goodness dogs cannot talk, otherwise we may of heard.... 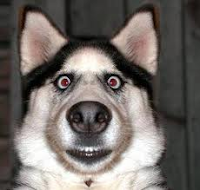 Its like he has to let everyone know he's here, has to announce his arrival like he's someone famous. Once off the lead he stops....Just stops...Not a sound........Until......He sees someone...Whether it be human or animal...Off he goes again, all singing and all dancing with jazz hands making that noise.

An old lady once asked me if he was a puppy to which I reluctantly had to reply "Ermm...No...Hes 7".

And there in lies the problem...He is 7 and there isn't a great deal I can teach him now. I guess I will just have to carry on doing that playground mum face when your kid has been naughty and the teacher is calling you back....You know the one I mean.....Yes.....That's the face. 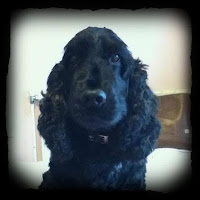 Lots of love
Me
xx