Have decided to split my holiday diary into 7 smaller daily parts. Hope you enjoy them as much as I have writing them.

Well, we are finally here in Cyprus. Miraculously enough the flight was actually alright. I will never completely enjoy it like some people but on a scale of 1-10 it was a definite 7.
The air steward who was called Sebastian had been a contestant on the X Factor a few years ago and at one point I thought he was going to break out into a rendition of River Deep but a small amount of turbulence put pay to that luckily.

Once we had landed we headed for our shuttle bus which was to take us to our hotel. Our holiday rep Maurice (very Larry Grayson) informed us that due to budget cuts he would not be accompanying us to out destination and that he would run through the finer points before we left. NICE !!

We arrived at our hotel which was beachfront and set along the coastline with 5 similar hotels. As we checked in we were greeted by a German Shot putter called Eva. She welcomed us with the grace of a angry Pitbull and in an extremely effective manner gave us the rundown of where everything was and times of dinner etc etc...
She offered us a bell boy to take our luggage up but we decided that he looked so knackered we would do it ourselves. She in turn gave him a right telling off at looking lazy, quite frankly she could of lifted our suitcases and us up in one hand and carried us all upstairs.
Our suite was lovely, clean and bright and had its own little private balcony. The Teenager and The Whirlwind had separate rooms which was a complete blessing due to the fact they had just threatend to maim and kill each other in the lift.

We unpacked and headed off for an afternoon by the pool. It was at this point it all went spectacularly wrong...............

As I told you in my last blog, this was our first holiday abroad in 7 long years and we had really splashed out and paid a small fortune for it. We were expecting a family environment, peace, quiet and tranquillity. WRONG!!!!! 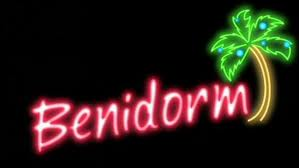 As we stepped out onto pool side we were greeted by the very opposite. The scene in front of us was not unlike a scene from the TV show Benidorm. Bomb diving kids in the pool, cigarette smoking tattooed welding women and to top it all off an entertainment team who were all on microphones encouraging the kids to find an adult and jump on their heads in the water.


As most of my friends know I used to be a closet snob but decided to come out as a fully fledged member of the "I LIKE CLASSY AND NICE STUFF" brigade. I am not embarassed of this at all.

We all stood like 4 startled rabbits staring out at the sight that greeted us. I spun round in the vague hope that we had by some small chance come out of the wrong door and we were in fact in the hotel next door. Alas "NO" was the answer to that. 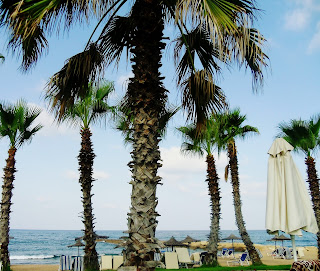 The Hubby (sensing that I was about to have a hissy fit) quickly guided me over to one side and pointed to a large grassy area through a little gate which over looked the beach and was somewhat quieter.We walked quickly due to The Teenager sneering and The Whirlwind pretending to choke on all the cigarette smoke. As we went through the little gate we were greeted by.......Calm, peace, palm trees and the beach.
"Ahhhhhhhh" was the sound that escaped my lips.
"Ohhhhhhhh" was The Teenagers reaction.
"Yeeeessssss" squealed The Whirlwind
"Thank you God" whispered The Hubby

At that moment a group of people beckoned us over. These were other families and honeymoon couples like us who had paid a fortune and who had all experienced the same reaction that we had just endured. As I sat on my sun lounger surveying the scene It became very obvious that it was a them and us kind of situation. They didn't come onto the grassy bit and we didn't go on to the tiled bit.

Some of the families told of arguments over in Camp 1 when one kid had taken another ones lilo and the mums had squared up to each other. Others spoke of mums and dads having huge stand up rows because the dads hadn't come in until 5am. It all sounded like a scene from Shameless, what the hell has happened to people these days. Where have manners and being nice to other people gone. What a shame that some people think its OK to just do as they please without any cause for others feelings.

I have attempted to smile at the Camp 1 mums but have been greeted by dirty looks. This evening a breakthrough occurred in the ladies loo's. As I washed my hands one of the women came in from Camp 1. I smiled and looked away when suddenly........ "Hiya" she said, followed by "You are so lucky you are in the quiet section, we are desperate to come over but cant."
"Why not"? I said.
"Because we have come with a huge group of 35 and we will get lynched if we leave the group. Shirley is our group leader and she pretty much tells us when and where we are going" she replied.
"Oh right, which one is Shirley then"? I asked
"Shes the one with the tattoos of all her 27 grandchildren on her leg" she answered slightly smirking.
It was at this point I did my very best Actors Guild "How Lovely" kind of face.

As I bid her a goodbye I scanned the foyer for Shirley and sure enough there she was standing amongst everyone bossing them around. And yes she really did have 27 names tattooed on her leg going from the top to the bottom.
If I had been brave enough I would of taken a picture of her leg to show you all but I quite like my face and didn't want my nose plastered across my face for being cheeky.

So there we go, Day 1 over and done with. First impressions were one of horror but after settling in I think we will be alright.


Lots of Love
Me xxxxxxxx

The names in this blog have been changed.