10 Things You Never Say To A Teenager

"Aren't you going to put a coat on ?" I asked on a particularly freezing -2º kind of morning. This question was answered with a grunt and then a huff as if to say"Yeah right, I have a jumper and blazer on. Why the hell do I need a coat...........I am a Teenage Boy and I DO NOT do coats".


What is it with them ?..................I often find myself asking this question. What happens between the age of 11 and 16 is something that will forever baffle me.......I know I know its hormones blah blah blah. But what about what really happens......................Like what really goes in their minds. I walk around on egg shells some days not wanting to say the wrong thing or fuel a massive strop, I don't remember being like this (or though my Mother will probably say different). With this in mind I have learnt the careful art (and it is an art) of not what to say and when not to say it.


1. Hurry Up - This will be met with rather interesting response that may involve a swear word or two, you cannot I repeat cannot hurry a Teenager up. They are on their own schedule and will not change it for anyone............Especially you!

2. Why don't you do that extra piece of homework if your bored ? - Expect school books to be shoved back in bag and a rant of "I'm so tired.......I'm not doing anymore than is necessary. If they wanted me to do it they shouldn't of said OPTIONAL" This may be followed by a sudden urge to disappear upstairs and pretend they have "other" stuff that is far more important.

3. So, what do you want to be when you finish school - This question is usually asked by older relatives that haven't seen them morph into a Teenager and is answered with a shrug or a simple "Dunno". To be honest at 13 I don't think I knew what I wanted to be,  I vaguely remember wanting to be a Dolphin Trainer or a Nun at some stage.

4. I absolutely forbid you to do that - This will be met with the most hysterical laughter and rolling around on the floor by The Teenager. Saying that I did use the sentence "You will not find anyone higher than me at this moment, not even GOD" which did seem to evoke a stunned reaction before the laughter began.

5. Whats wrong - The most pointless question ever if asked to a Teenager, they have no clue whats wrong so why the heck should they be able to tell you the answer. I find a more subtle approach is needed like "I'm downstairs if you need a hug" I would imagine from the boys point of view this is their worst nightmare but on the rare occasion it has worked.

6. Can you tidy your room please - Again, pointless.

7. Is that what you're wearing ? - The minute this comes out of my mouth I instantly regret it, why oh why did I say it. Not many words are exchanged but its the look that is shot at you from a 17 year old female of the species. If looks could kill.........I wouldn't be typing this.

9. When I was your age - They don't care about when you were young, in fact I don't even think they recognise you were young once. To them you were born into an era of no social networking, no phones and Crackerjack..................Actually I can see their point.

10. We'll See - Teenagers are much like toddlers and cannot deal with the uncertainty of an unanswered question. A full description is needed along with photographic and legal evidence to back up any plans that they need confirming. 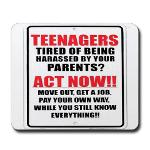 Lots of Love
Me
xxxxxxxx