This morning started well but went completely pear shaped when I had the most horrendous accident.

To cut a very long story short, The Teenager took herself off back to the room to get her book and after 1/2 hour I began to get a little concerned. The Husband and The Whirlwind were off snorkeling and I was alone with just my beach bag and my bottle of water. As any mother will understand there is a little voice that sometimes fills your head with crazy thoughts about where your kids are and things that might of happened to them. I am no different and convinced myself that she had been abducted and I would never see her again.

In my haste to rescue her I shoved my kaftan on and grabbed my bag and hastily stood up.....BANG!!! I smacked my nose on the end of one of the spokes of the beach umbrella. It went with such a bang I dropped like a stone back onto my bed and literally saw stars. After shaking my head I went to stand up again. This time I realised that I had sweat dripping from the end of my nose...Wrong!! It was blood. I sat back down again and pulled a little mirror from my bag only to discover my face was completely covered in blood and I had a gash the size of The Grand Canyon down my nose.

Luckily a lady at the next bed had seen what was going on and between us we cleaned my nose up and stuck a plaster on it to stop the bleeding. I think my pride was hurt more than my nose and I sat for a minute to regain some level of composure. 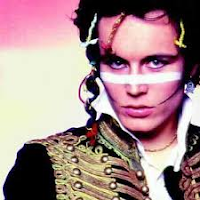 Just then The Teenager swans back over without a care in the world rabbiting on about how she decided to change bikinis and then her sarong didn't match. In true Teenager fashion in took her a good 10 minutes to notice that I was sitting with blood all down my front and had a plaster on my nose resembling Adam Ant.
She kind of looked around and then gasped "Oh my God, whats happened Mum". I relayed the story to her and noticed a slight smirk desperately trying to break free from her mouth. It didn't cross her mind that had she just gone up and come back down again I would not of stood up and bashed my nose.....Teenagers!!!


The Husband was slightly more sympathetic and checked to see if I needed stitches (which I didn't luckily). I spent the rest of the day wearing a plaster and received several strange looks from onlookers.

That will teach me for assuming that Shirley (see Day 1 Diary) would of punched me in the nose wont it.

The rest of today has been fine, except for a new family that have just arrived in our little peace of paradise. From what I can gather they absolutely hate each other, the kids look traumatised and bewildered by their parents. The reason I have come to this conclusion is because of the following conversation they had...

Her: "Can you get us some drinks please"
Him: "Why cant you get them, I have just started a new chapter in my book"
Her: "For gods sake, why are you so lazy?"
Him: "Because I work so bloody hard so you can come on expensive holidays like this. That's why".
Her: "Well don't worry because I am coming on my own next year".
Him: "Thank God for that....2 weeks without having to look at your miserable face and listen to your constant nagging"
Her: "Oh why don't you just go and drown yourself in the sea".

You can see why I think they don't like each other now cant you.

The rest of today has been spent trying not to laugh at other people nearly knocking themselves out on low parasols. Have counted at least 10. Of course I totally sympathise but was secretly hoping I wouldn't be the only one wearing a plaster on my nose. 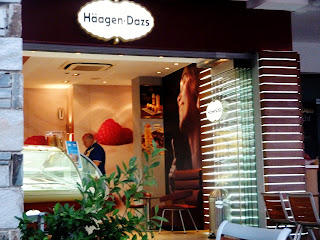 Spent this evening at a Haagen Dazs Ice Cream Parlour across the road. 4 cups of deliciousness were consumed whilst we watch the world go by.

Myself and my sore nose are off to bed now. Night night.