Our American friends checked out this morning and had one final "Love session" before going. I instructed the kids to be as loud as they wanted and even turned up Lady Ga Ga on the Ipad, before accidentally on purpose throwing a suitcase at the adjoining door. As we left, so did they and I gave them the type of look only a mother would give. They in turn looked mortified and practically ran down the hall to the lifts. Bless them (I'm only jelous).

We were off to Tussaud's today as The Teenager feeling very disgruntled that she hadn't bumped into the real Lady Ga Ga wanted her picture taken with a wax one. The Whirlwind complained that he hated the creepy wax figures and we had done it in London last year so why did we have to go again.(We still laugh at the fact the only figures he wanted his picture taken with were Stephen Hawkins and Gandhi). I explained that if he did Tussaud's we would go next door to the Ripley's Believe It Or Not exhibition straight after, this seemed to work and we headed off.

Once at Times Square we found it easily.....Then we saw the queue.....It must of been 100 people deep and a slight groan echoed from every ones mouths. "Never mind" I said cheerfully "It will go down quickly, come on". We went to the back and stood waiting patiently, I tried my best to engage the kids but any mum or dad reading this will sympathise with me. Once they get over the age of 11 Eye Spy just doesn't really cut it and I received "the look" from The Teenager when I suggested it. After 1/2 hour of not moving forward The Hubby decided he would go and ask how much longer it was going to be. On his return I noticed a strange smile on his face....."Errrmmm.......This is the queue for the bus tour....Not Tussaud's" he whispered to me........."What" I yelled back, "Yep...There is no queue at all for Tussauds, we can just walk straight in"................ARGHHHHHHH!!!!!

I decided not to tell the kids the truth and try and earn some street cred back after the eye spy fiasco, informing them that we could go straight to the front of the queue as we were from England and they had been so well behaved standing for so long. I'm not sure if the eldest believed me but I was certainly not going to correct myself.
Both exhibitions were brilliant and we all really enjoyed it......Some more than others!!!!!


On our way home The Teenager decided she would quite like a Yankees hoodie and The Whirlwind wanted a cap so we headed on in to The Yankees store. I remained outside as The Northern Mother had phoned to check up on us. After what seemed like an eternity I popped my head round the door and discovered the kids lining up to pay and The Husband standing watching the baseball on a huge TV in a slight sport coma induced state........Bloody Typical. 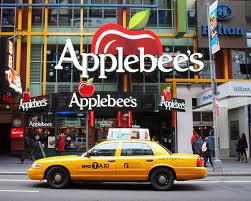 We had dinner at Applebees (which The Husband assured us was mentioned in a film he had seen). Great restaurant and very kid friendly, food was immense and I even had 1 of my 5 a day by having green beans....Trouble was they were deep fried.....Think I'm just going to go with it from now on. 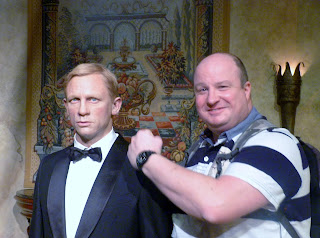 We then had a slow walk around Times Square which was amazing at night time all be it very busy and very slightly intimidating with all the people dressed up as characters who then expected money after having your picture taken with them. Luckily we had our very own 007 escorting us.......Think he had also enjoyed Tussards a bit too much as well..........


Think we will sleep well tonight. 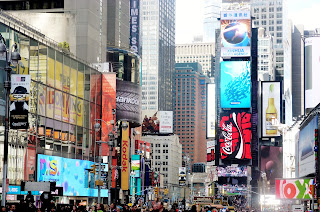 Come back tomorrow for Day 5. 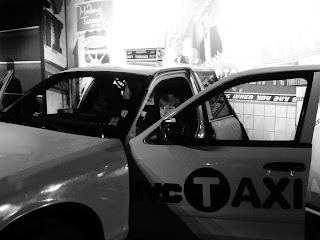 P.S....The Whirlwind finally got his chance in a yellow cab......And The Husband couldn't say no this time. x

This post has been published a day after the Boston Marathon bombings. My thoughts are with all those that were injured and lost there lives as well as the families of those that have been affected by this terrible tragedy. God Bless. xx