The Home Visit From Hell

Yesterday it suddenly hit me like a ton of bricks, my little boy is officially all grown up. This realisation dawned on me in the morning when I bumped into a very lovely friend of mine in the supermarket car park and we got to talking about how our little boys would be starting secondary school soon . I can still remember when he started school.....oh how I can still remember. It actually gives me palpitations even now. I guess I just made home too comfy for him as he just never wanted to go. That included nursery too, he would hang off me like he was never ever going to see me again and I would reluctantly leave with a heavy heart telling myself that he had to go and that he would be OK.
The day that sticks in my memory was when we received our Home Visit for primary school. I sat him down and talked about what was going to happen and how it was very important that he was polite and happy so that the lovely teachers would go back and tell everyone how like his sister he was and how much they were looking forward to him joining their school. He seemed to take it all in but how wrong I was.
My time slot was 10am on Monday and I had mowed the lawns and tidied the house, I had even made cakes (for anyone that knows me, OK OK they were from a packet and I just iced them). 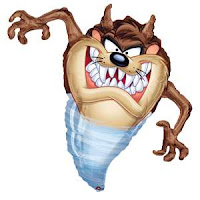 The clock ticked away merrily, I chewed all my nails off and The Whirlwind looked completely relaxed about the whole thing. "Ding Dong" went the bell "Oh S**t" went mummy, "BYE BYE" shouted The Whirlwind as he disappeared up stairs peeling off his clothes as he went. Why oh why do little boys think it is acceptable to be naked all the time,( mind you if you go out in London after midnight the big boys are no better.)
Anyway, I opened the door to see 2 smiley faced teachers standing before me. What happened over the next 20 minutes can only be described as a nightmare to end all nightmares. They came in and I called to The Whirlwind to come down and see our lovely visitors "NO" he replied. I reminded him that there would be no swimming later if he didn't come down "DON'T CARE" he said. The teachers told me it was fine and that in their experience children always came down in the end as curiosity got the better of them. (Oh really,have they met my school hating child).
After what seemed a really long time and much chit chatting I decided to go and retrieve The Whirlwind. As I approached the bottom of the stairs and looked up the sight that met my eyes can only of been described as naked carnage. There he was with not a stitch on sitting with his little shiny bottom hanging over the top step. "What are you doing darling" I said through gritted teeth.
"I make a volcano for the teacher" he replied in his sweet voice.
Before I could get up the stairs the teacher in question came bounding out and was up them like a bat out of hell. I watched on helplessly as he revealed not only his private parts but a volcano made out of CLAY!!! (The clay had come from a set that had been given to him for when he was much much much older.)
The volcano itself was a master piece even if I do say so myself, it was the sanitary towels with wings that he had stuck all over the sides that were a bit dodgy. And for the final touch a great big tampon sticking out the top. To be fair the teacher didn't bat an eyelid, maybe it was the sight of me sliding down the wall that made her react so kindly. "Well how lovely" she said "I can see we have a budding artist on our hands. I think you and I are going to get along just fine". The Whirlwind looked at her straight in the eyes, stood up and placed his hands on his naked hips and said "that's nice coz I don't". He then took the tampon out of the top of the volcano and gave it to her "but thank you for coming to see me". He turned on his heels and wiggled off into his room.
The look on her and my face was priceless. I opened the door in a sort of shocked daze and thanked her for coming and of course apologised many times as she went down the path probably onto the next child who would be totally bloody angelic making mine look even worse (if there could be an even worse).


The only thing I am grateful for is that they don't do home visits for secondary school, god only knows what little gem he would pull out of the bag for that one !!!