I want to be one of Charlies Angels !!! 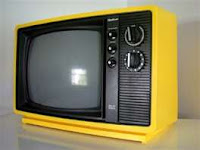 Whilst having my lunch today I flicked on the TV only to discover a channel I had never seen before. This channel was by far the most entertaining thing I had ever laid eyes on. Not only was Dallas, Wonder Woman and Starsky and Hutch on they were also showing re-runs of my favourite show ever....... Charlies Angels.
Oh how I loved those angels. I wanted to be an angel. I wanted to graduate from the Los Angels Police Department. I wanted that hair and most importantly I wanted that gun.
I can remember reenacting  it in the playground at Primary school. Kelly the really pretty Angel was always the one who everyone wanted to be, then there was Jill who was really fast at running, very sophisticated and had THAT HAIR! Then Sabrina the slightly tomboyish one who nobody ever wanted to be except me. This was mainly because she was the Angel who always nearly got shot and I loved playing a good dying swan routine in the middle of the playground.

Then there was Charlie himself, the rich but never seen (apart from his hands) private investigator, who seemed to think it was OK to send out 3 girls to do his dirty work. He always opened the show with his little speech ... "Once upon a time, there were 3 little girls who went to the police academy - 2 in Los Angeles, the other in San Fransisco- they were each assigned very hazardous duties. But I took them away from all that, and now they work for me. My name is Charlie." .....HELLO !!! Anybody worried about some freaky guy who wont let anyone see him taking 3 LITTLE girls away from their secure jobs with pensions and throwing them into even more dangerous situations. Then on top of all that making them wear very tight outfits while he just sits back and watches from the sidelines.

Anyway putting all that slightly creepy stuff aside it really was a fantastic show, they just don't make them like that anymore. I recently watched a well known series where some guy in a particularly scary mask was chasing women through the streets of London. Let me tell you I didn't sleep for 3 nights and kept one eye open the whole time.

I say bring back the old favourites to our popular channels and let our teenagers see good wholesome cops and robbers.
Who knows it may even mean the hairstyles come back into fashion then I can definitely have one along with one of those waistcoats..... 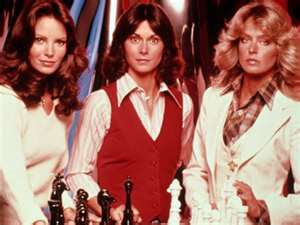